Society for Neuroscience - The Neural Networks Behind Persuasion

The Neural Networks Behind Persuasion

To celebrate SfN’s 50th anniversary, each 2020 issue of Neuroscience Quarterly will delve into the science behind one of SfN’s four Mission Pillars — statements of the Society’s strategic goals.

Carrying out SfN’s Mission Pillar “Advocating for the Field” requires persuading the public and policymakers to support scientific research. This article dives into what happens in the brain during an attempt at persuasion, both for the persuaded and the persuader.

Science will not be swayed. A temperamental experiment won’t start working if asked nicely. Mice cannot be talked into completing behavioral tests. But science is not done in isolation — it benefits from the support of coworkers and collaborators, family and friends. Any of them may be willing to help if persuaded to do so. Lawmakers may understand the importance of science funding if persuasion is successful. But what makes a message persuasive? The answer lies in the brain.

Persuasion Begins in the Valuation Network

Recent neuroimaging research reveals a number of key brain regions and networks involved in persuasion, including the ventromedial prefrontal cortex, the ventral striatum, and the temporoparietal junction. The ventromedial prefrontal cortex and ventral striatum both work in the brain’s valuation network. “These brain regions help us evaluate the self-relevance and value of all different kinds of stimuli,” says Emily Falk, professor of communication, psychology, and marketing at the University of Pennsylvania.

The valuation network can compare and choose between different types of rewards, even ones that appear unrelated. “Would you rather have $5 or snuggle with a puppy? Those things aren’t inherently comparable, but people can fairly quickly make a decision about which they prefer,” says Falk. “That’s because we have this value system in the brain that helps us calculate how valuable each alternative is and which one we prefer.” 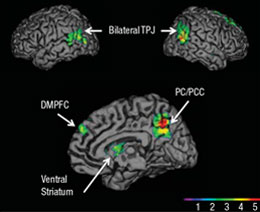 Activity in this part of the valuation network reveals how persuasive a message is. In one functional magnetic resonance imaging study, researchers examined the brain activity of people while they read New York Times articles (1). Activity in the ventromedial prefrontal cortex and ventral striatum predicted which articles were shared the most on social media.

“Activity in the ventromedial prefrontal cortex and ventral striatum predicted which articles were shared the most on social media.”

Gain messages may fare better in persuasion because they emphasize the personal value of adopting a behavior. This makes it easier for someone to alter their self-concept based on the new behavior — i.e., view themselves as a sunscreen-wearer and start applying sunscreen every day. Hence the increased brain activation: the ventromedial prefrontal cortex assesses the value of an idea, sees how it fits into your self-concept, and adjusts behavior accordingly.

However, the most persuasive message style is not one-size-fits-all for every brain. The type of message deemed valuable varies across social contexts and cultures (3). In one study, messages focusing on the personal consequences of caffeine consumption persuaded more European Americans — members of an individualistic culture — to cut back on caffeine (4). Messages highlighting the social consequences of the behavior persuaded more Asians and Asian Americans, who are part of a collectivist culture.

Regardless of the content, successful persuasion stems from the valuation network flagging a message as valuable to the self.

All together, these studies drive home that successful persuasion depends on understanding what matters to the audience. The temporoparietal junction helps people do just that. As part of the mentalizing network, it works with other brain regions to understand other people’s mental states. Activity in this brain region may reveal who is a naturally talented persuader.

In a study by Falk and her team, undergraduate college students split into two groups: interns and producers (5). “Interns” heard TV pilot pitches and picked which pitches to pass on to a “producer.” The producer then picked which pitches to recommend to their imaginary boss — based only on how the interns described the pitches.

The researchers used functional magnetic resonance imaging to monitor the brain activity of the interns while they listened to each pitch. Activation of the ventral striatum predicted which ideas were eventually picked by producers, regardless of if the interns themselves picked the pitch. This could mean that the ventral striatum can recognize the social appeal of an idea. Activity in the temporoparietal junction predicted which interns fared the best at convincing producers to pick their preferred TV pilot. Since the temporoparietal junction helps individuals understand the mental states of others, this activity could indicate that successful persuaders consider the perspective of their audience, even before they start sharing.

It’s clear that successful persuasion requires thinking about the audience and the type of messaging that would be most valuable to them. But how can neuroscientists incorporate this research into how they speak with those who fund their work — policy makers and the public? “One of the things that is consistent with our data — also with lots of behavioral evidence from psychology and communication — is to think about making what we write relevant to our audience,” says Falk. Focus on describing the implications of your data with the same care you used to explain the nitty-gritty of the methods. “A broad audience of non-scientists wants to know why it’s important to them.” Some ways to do this include “telling a story, giving examples, and making analogies, as opposed to exclusively relying on abstract, didactic facts or stats,” says Falk.

Read more about how SfN members are applying these principles in “Supporting Research Funding Through Year-Round Advocacy.”