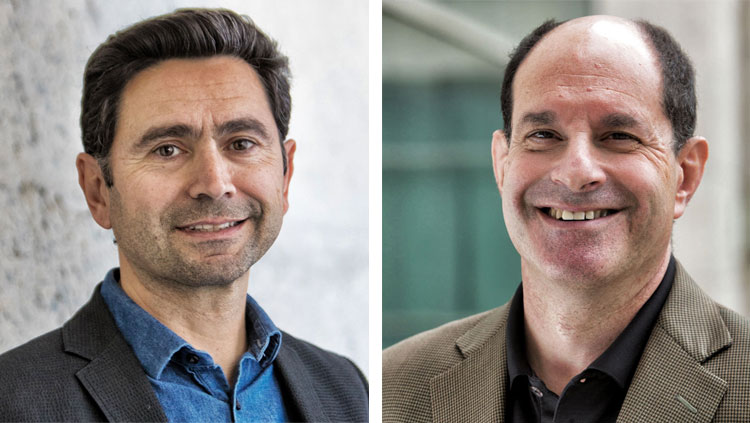 The Kavli Prize in Neuroscience is awarded to David Julius and SfN member Ardem Patapoutian for their independent discoveries of sensory receptors for temperature and pressure, respectively. While the mechanisms for smell and vision have long been described, a specific molecular understanding for how physical properties like temperature and pressure are detected and encoded into electrical signals the brain can process had been lacking. Over the past two decades, Julius and Patapoutian have independently described the molecular mechanisms that underpin sensitivities to temperature and pressure, as well as pain, and provided new insights into human physiology and disease.

David Julius, a physiologist and professor at University of California, San Francisco used an elegant approach to discover how the body detects high and low temperatures by exploiting the fact that there are chemicals that mimic different temperatures – such as the heat of pungent chili peppers and the coolness of mint. Julius and his team began by employing capsaicin, the compound in chili pepper that elicits the sensation of heat, to identify the gene encoding the first known temperature-sensitive sensor, the ion channel named TRPV1. Julius further discovered that the TRPV1 channel is also activated by high concentrations of protons and chemical compounds generated during the inflammatory response, providing a molecular basis for the pain hypersensitivity observed in damaged and inflamed tissue. This ion channel is a molecular integrator for both temperature sensing and inflammatory signals. Hotness – whether the burn from a spicy chili pepper or the burn from piping hot coffee – is encoded by the same sensor.

Genetic experiments conducted by Julius then showed that mutant mice deficient for TRPV1 have reduced heat sensitivity and a marked reduction in inflammatory and cancer pain. This discovery led to the identification of a family of channels involved in sensing specific ranges of warm and cold temperatures as well as irritants and inflammatory processes that may result in debilitating pain. In other experiments, Julius and collaborators identified these channels as infra-red heat sensors in vampire bats and snakes, and as targets of spider and scorpion toxins, further validating their roles in temperature and pain sensation throughout the animal world. The newly discovered TRPV1 and related channels are now areas for development of new pain-relieving drugs.

Ardem Patapoutian, a professor at Scripps Research and an investigator at the Howard Hughes Medical Institute, discovered a family of pressure-sensitive ion channels, the PIEZOs, with deep evolutionary roots, as they are present in many distantly related species.

Patapoutian and colleagues employed cells from a neuroblastoma cell line, which can be grown in a dish in a laboratory setting. These cells respond to pressure changes from a light touch by generating an electrical signal. With a curated list of over 300 suspected genes (out of the more than 20,000 that exist in our DNA) that might encode for a pressure-sensitive channel, they grew cultures of cells missing one gene at a time. Patapoutian’s lab then tested the samples one by one, looking for the gene that, when missing, resulted in cells without pressure-sensing abilities. Candidate gene #72 on the list turned out to be the one.

PIEZOs were soon confirmed by Patapoutian to be essential for pressure sensing in mammals. His work showed that PIEZOs form ion channels and that they are directly responsible for pressure-sensing by Merkel cells and touch sensory terminals in the skin, and by proprioceptors (sensory receptors with endings in the muscle that respond to the body’s position and movement in space).
PIEZOs also sense pressure by nerve terminals in blood vessels and in the lungs and affect red blood cell volume, vascular physiology and underlie a broad range of human genetic disorders. The discovery of the PIEZOs opened the door to understanding mechanobiology, an emerging field of science that intersects biology, engineering and physics, and focuses on how physical forces and changes in the mechanical properties of cells and tissues contribute to health and disease.

“The individual discoveries of David Julius and Ardem Patapoutian have given the scientific community the molecular and neural basis for thermosensation and mechanosensation that is revolutionizing our understanding of sensory detection and will have a profound impact on addressing health and disease worldwide,” said Kristine B. Walhovd, chair of the Kavli Prize Committee in Neuroscience.

About The Kavli Prize

For more detailed information on The Kavli Prize, the 2020 laureates and their work, visit www.kavliprize.org.

The Kavli Prize Laureates are typically celebrated in Oslo, Norway, in a ceremony presided over by His Majesty King Harald followed by a banquet at the Oslo City Hall, the venue of the Nobel Peace Prize. Due to the COVID-19 pandemic, this year’s award ceremony is postponed and will be held together with the 2022 award ceremony in September 2022.