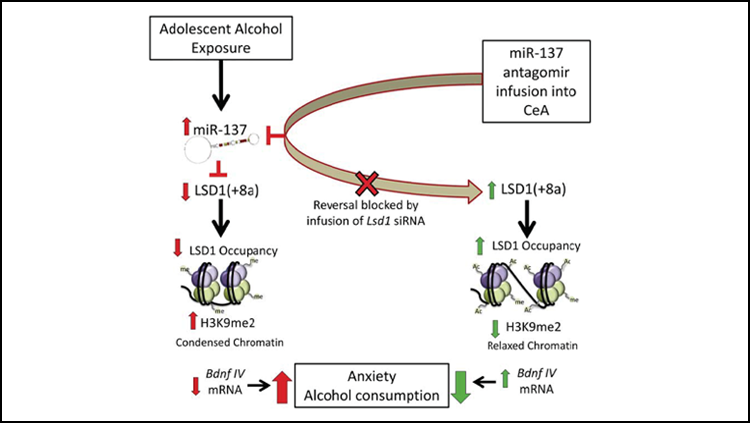 Adolescent binge drinking modifies gene expression in a fashion that increases susceptibility to anxiety and alcohol use disorders in adulthood, according to research in rats recently published in eNeuro. Targeting the microRNAs responsible could be a new route for undoing the damage of alcohol use caused during adolescence.

Previous researchers found that microRNA, small bits of RNA that modify how genes are expressed rather than coding for a protein, are involved in how early-life alcohol exposure changes the brain, but the exact mechanism was unknown.

Kyzar et al. exposed adolescent rats to alcohol and measured the resulting levels of miR-137, one type of microRNA, in the rats' amygdalae. The rats exposed to alcohol displayed increased levels of miR-137, resulting in lower expression of proteins necessary for healthy neuron growth and branching. In adulthood, the rats displayed higher levels of anxiety behaviors and a higher preference for alcohol compared to control rats. Inhibiting miR-137 in the amygdala reversed the anxiety and alcohol preference in the rats with an adolescent drinking history.

Read the manuscript in eNeuro: MicroRNA-137 Drives Epigenetic Reprogramming in the Adult Amygdala and Behavioral Changes After Adolescent Alcohol Exposure