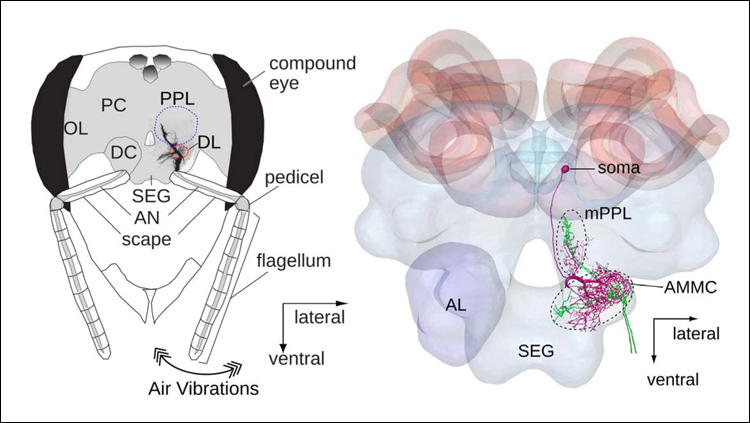 Changes in a vibration-sensitive neuron may equip forager honeybees for waggle dance communication, according to research recently published in eNeuro.

Forager honeybees share information about the location and value of food sources by moving their body from side to side and beating their wings. The observing bees interpret the waggle dance through sensory organs that send the information to vibration-sensitive neurons, including DL-INT-1.

After developing from an egg, young adult honeybees emerge from their cell and begin learning their social position. The honeybees that become foragers learn the waggle dance, which may require further brain development. To explore this, Ajayrama Kumaraswamy and colleagues at Ludwig-Maximilians-Universität München, Fukuoka University, and University of Hyogo recorded the electrical activity of DL-INT-1 neurons in young adult and forager honeybees and then created computer simulations and three-dimensional models of the neurons.

In specific regions of DL-INT-1 neurons, the older bees had less dense branching compared to the younger bees. Additionally, the neurons in older bees demonstrated enhanced signaling and more precise connections to other brain regions. These findings suggest that important adaptations occur in the honeybee during the transition into the forager role, which allow them to effectively communicate via the waggle dance.

Read the manuscript in eNeuro: Adaptations During Maturation in an Identified Honeybee Interneuron Responsive to Waggle Dance Vibration Signals