Society for Neuroscience - JNeurosci: Most Discussed Research Published in June

Below are the five research papers published in June 2019 that generated the most online discussion, as measured by Altmetric. Altmetric data is available for all articles published in JNeurosci on the Info & Metrics tab. Learn more about how the Altmetric score is calculated. 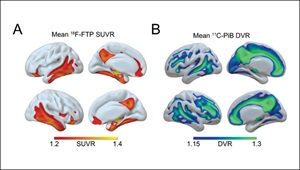 Several studies have linked sleep disruption to the progression of Alzheimer’s disease (AD). Tau and β-amyloid (Aβ), the primary pathological features of AD, are associated with both objective and subjective changes in sleep. However it remains unknown whether late life tau and Aβ burden are associated with distinct impairments in sleep physiology or changes in sleep across the lifespan. Using polysomnography, retrospective questionnaires, and tau- and Aβ-specific positron emission tomography, the present study reveals human sleep signatures which dissociably predict levels of brain tau and Aβ in older adults. These results suggest that a night of polysomnography may aid in evaluating tau and Aβ burden, and that treating sleep deficiencies within decade-specific time windows may serve in delaying AD progression. 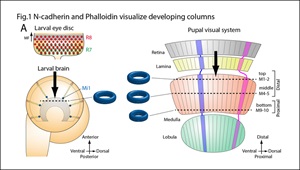 The columnar structure is a basic unit of the brain, but its developmental mechanism remains unknown. The medulla, the largest ganglion of the fly visual center, provides a unique opportunity to reveal the mechanisms of three-dimensional organization of the columns. We reveal that column formation is initiated by three core neurons that establish distinct concentric domains within a column. We demonstrate the in vivo evidence of N-cadherin-dependent differential adhesion among the core columnar neurons within a column along a two-dimensional layer in the larval medulla. The two-dimensional larval columns evolve to form three distinct layers in the pupal medulla. We propose the presence of mutual interactions among the three layers during formation of the three-dimensional structures of the medulla columns. 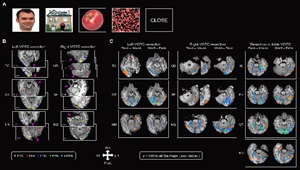 One approach to reduce seizure activity in patients with pharmaco-resistant epilepsy involves the resection of the epileptogenic focus. The impact of these resections on the perceptual behaviors and organization of visual cortex remain largely unexplored. Here, we characterized the visuoperceptual and neural profiles of ventral visual cortex in a relatively large sample of post-resection pediatric patients. Two major findings emerged. First, most patients exhibited preserved visuoperceptual performance across a wide-range of visual behaviors. Second, normal topography, magnitude, and representational structure of category-selective organization was uncovered in the spared hemisphere. These comprehensive imaging and behavioral investigations uncovered novel evidence concerning the neural representations and visual functions in children who have undergone cortical resection, and have implications for cortical plasticity more generally. 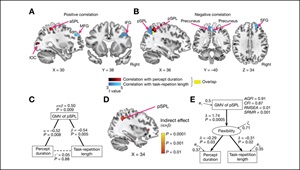 Behavioural studies show perceptual over-stability in autism spectrum disorder (ASD). However, neural mechanisms by which such sensory symptoms can coexist and often correlate with seemingly separate core symptoms remain unknown. Here, we have identified such a key neuroanatomical substrate. We have revealed that over-stable sensory perception of individuals with autism is linked with their cognitive rigidity, a part of core restricted, repetitive behaviours symptoms, and such a behavioural link is underpinned by a smaller grey matter volume in the posterior superior parietal lobule in autism. These findings uncover a key neuroanatomical mediator of autistic perceptual and cognitive inflexibility and would ignite future studies on how the core symptoms of autism interact with its unique sensory perception. 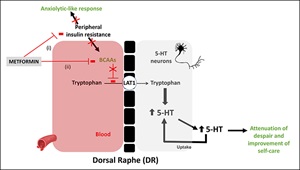 Insulin resistance in humans is associated with increased risk of anxio-depressive disorders. Such relationship has been also found in rodents fed a High Fat Diet (HFD). To determine whether insulin-sensitizing strategies induce anxiolytic- and/or antidepressant-like activities and to investigate the underlying mechanisms, we tested the effects of metformin, an oral antidiabetic drug, in mice fed a HFD. Metformin reduced levels of circulating branched-chain amino acids which regulate tryptophan uptake within the brain. Moreover, metformin increased hippocampal serotonergic neurotransmission while promoting anxiolytic- and antidepressant-like effects. Moreover, a diet poor in these amino acids produced similar beneficial behavioral property. Collectively, these results suggest that metformin could be used as add-on therapy to conventional antidepressant for the comorbidity between metabolic and mental disorders.

Stay updated on the latest research: Sign up and manage your Alerts to receive email alerts of table of contents, searching, and article citation alerts for both issues and Early Release.