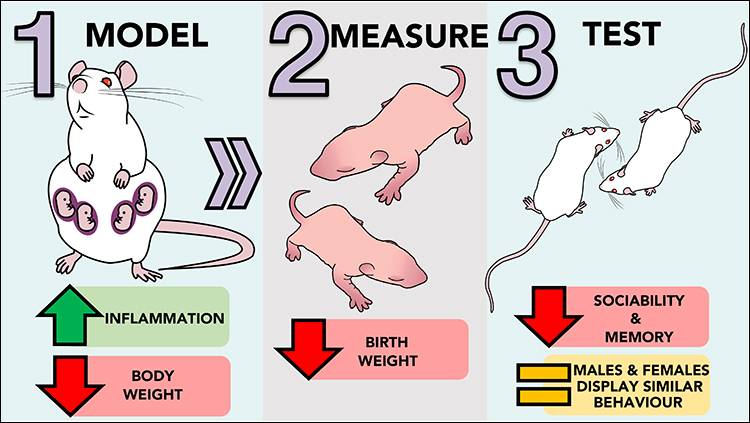 Male and female rats whose mother experienced a simulated viral infection during pregnancy display autism- and schizophrenia-like behaviors, according to a new follow-up study published in eNeuro. The researchers extended findings of their previous study of male animals to their female siblings.

Maternal immune activation (MIA) is a risk factor for human psychiatric disorders that manifest differently in men and women. Preclinical MIA research has historically been conducted mainly in males, which may contribute to conflicting results in this research area.

John Howland and colleagues at the University of Saskatchewan in Canada revisited their 2018 eNeuro study in which they observed behavioral abnormalities in the male offspring of rats who experienced an inflammatory event during pregnancy. The researchers report similar findings in their new study of these animals' female littermates. This similarity highlights the limitations of this model for investigating the neural underpinnings of documented sex differences in mental illness.

Read the manuscript in eNeuro: Maternal Immune Activation During Pregnancy Alters the Behavior Profile of Female Offspring of Sprague-Dawley Rats