Maternal use of the antidepressant fluoxetine (Prozac) can alter the brain circuits in her offspring that control behaviors reminiscent of autism spectrum disorder, suggests a study in mice published in eNeuro. These results have no immediate bearing on the treatment of depression in pregnant women. 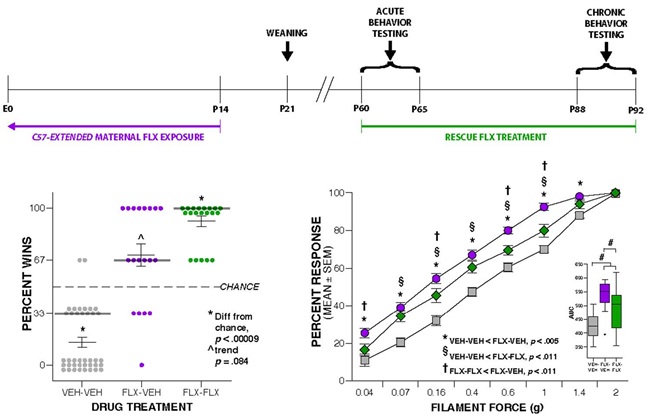 Medications that increase availability of serotonin in the brain — selective serotonin reuptake inhibitors (SSRIs) — are commonly prescribed to treat mood disorders in pregnant women. Previous research in humans suggesting disruptions of the serotonin system in the risk of developing autism has motivated scientists to examine the influence of SSRI treatment during pregnancy on brain development.

Susan Maloney, Joseph Dougherty and colleagues developed a rodent model of maternal SSRI exposure to investigate the effect of the drug alone, without any additional stress, on the development of autism-like behaviors in offspring. The researchers found that the pups of pregnant mice exposed to fluoxetine throughout the human equivalent of three trimesters and one year of nursing were the most vulnerable, developing social abnormalities as well as repetitive behavior patterns and hypersensitivity to touch reminiscent of autism. Re-exposing these mice to fluoxetine as adults improved their sensory sensitivity but worsened the social abnormalities. This finding suggests that some of these circuit alterations may be reversible while others may be permanently changed by fluoxetine.