The state of a woman's immune system during pregnancy may shape the connectivity of her child's brain, suggests a study of teenage mothers published in JNeurosci. The research emphasizes the influence of maternal health on a child's susceptibility to psychiatric disorders later in life. 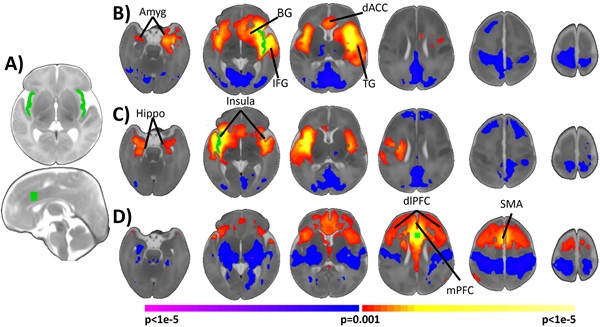 Marisa Spann, Bradley Peterson and colleagues studied adolescents (ages 14 to 19) pregnant with their first child to examine the relationship between two proteins released by the mothers' immune systems during the third trimester of pregnancy and the development in the infants of a brain network involved in disorders such as autism, schizophrenia and attention-deficit/hyperactivity disorder. The researchers found that higher maternal levels of these proteins were associated with greater connectivity of the infants' brain regions in this network and with higher cognitive ability at 14 months of age. Activation of the maternal immune system was also associated with lower fetal heart rate at the end of gestation, which may indicate delayed development of the autonomic nervous system. These results suggest that the final weeks of pregnancy have an important influence on a child's brain development.