Young adults with thinner cortex in particular brain regions are more impulsive during a decision-making task than teens with thicker cortex, according to a large correlational study of adolescents from the Philadelphia Neurodevelopmental Cohort. The results, published in JNeurosci, suggest that individual differences in brain structure could be used to identify youth at higher risk of making dangerous choices. 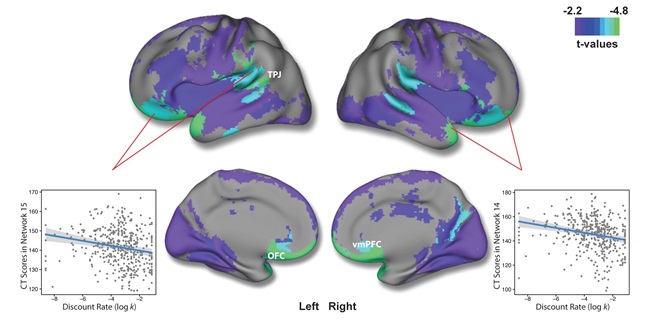 In a previous study of adults, cortical thickness was found to be associated with a preference for small, immediate rewards over larger, delayed rewards. This trait, known as delay discounting, is a measure of impulsivity that reflects the decreasing value of a reward the longer it takes to receive it.

Marieta Pehlivanova, Joseph Kable, Theodore Satterthwaite and colleagues studied whether this relationship between cortical thickness and reward preference holds true for teens, whose brains are undergoing dramatic structural changes. The researchers analyzed behavioral and neuroimaging data collected from 427 boys and girls (ages 9.3-24.3) who made hypothetical choices between receiving smaller amounts of money immediately or larger sums up to six months later. The thickness of 19 structural brain networks, which included regions involved in value-based decision-making, was related to the degree of delay discounting, with a thinner cortex associated with greater delay discounting. Cortical thickness predicted teens' delay discounting above and beyond cognitive and demographic variables, such as mother's level of education.