Male rats exposed to air blasts designed to mimic those from explosives used in recent military conflicts have symptoms of post-traumatic stress disorder (PTSD) that are improved by a drug currently being evaluated in humans for treatment-resistant depression and suicidal tendencies. The research, published in eNeuro, provides a new direction for addressing the mental health problems that often arise following a common brain injury in veterans. 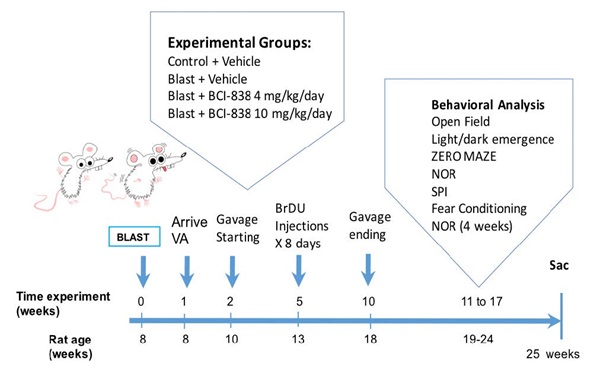 Concussions are the most prevalent form of traumatic brain injury (TBI) among military personnel, and many cases go unreported. These injuries have been largely caused by the high pressure emanating from improvised explosive devices in Iraq and Afghanistan. PTSD and depression are increasingly diagnosed in patients with mild TBI, including some cases in which veterans do not recall a traumatic experience, suggesting that the blast itself may be responsible for these conditions.

Sam Gandy, Greg Elder and colleagues found that treating rats two weeks after being exposed to multiple high pressure blasts with a low or high dose of BCI-838 — a drug in clinical trials that targets receptors of the neurotransmitter glutamate — alleviated anxiety and fearful behaviors as well as memory deficits. The drug also promoted the generation of new brain cells in the hippocampus, which may be one way it exerts these effects.