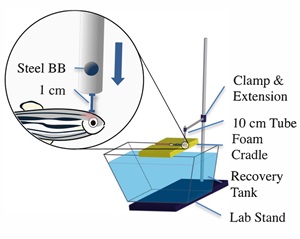 A simple and inexpensive zebrafish model of concussion, reported in eNeuro, reveals the genetic pathways underlying the animal’s remarkable ability to regenerate injured brain tissue. Understanding the mechanisms of regeneration in the zebrafish brain could ultimately help identify new ways to promote recovery from head injury in humans.

Mild traumatic brain injury, better known as concussion, is a common and underreported physical trauma caused by a blow to the head. Rory Spence and colleagues developed a technique to induce concussion and study recovery in a line of zebrafish that are very genetically similar to humans. They found that, within the first three days of injury, fish in the concussion group were slower to find a school of fish with which they previously swam, a measure of spatial memory which is impaired in other animal models of concussion and human patients. The researchers identified differences in the expression of genes involved in various aspects of the injury response and recovery, including the proliferation and migration of new brain cells, compared to control fish.