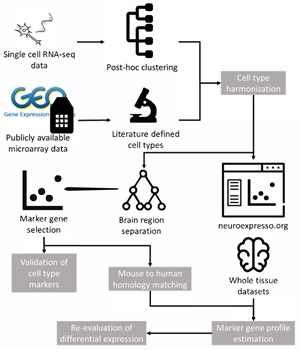 An online database of gene expression profiles for 36 major types of brain cells from 12 brain regions, based on mouse data from multiple laboratories, is reported in a new paper published in eNeuro. The tool is provided as a resource for neuroscientists at http://neuroexpresso.org/ and was presented on Wednesday November 15 at Neuroscience 2017, the annual meeting of the Society for Neuroscience.

Brain cells can be described in many different ways depending on qualities such as location, electrical properties and the neurotransmitters they release. Identifying specific marker genes that are expressed by cells straddling these classifications can help to better define their functions and properties, which is necessary to understand their role in neurological disorders.

Paul Pavlidis and colleagues reanalyzed previously published data to create a comprehensive catalogue of brain cell type data in a web-based application called NeuroExpresso. The authors used the data to identify marker genes, which can be used to estimate cellular composition of mouse and human tissue using marker gene profiles. They demonstrate the agreement of their approach with experimental results from studies of human brain disorders including Parkinson’s disease. An early version of NeuroExpresso has been used to interpret gene expression in the brains of suicide victims.