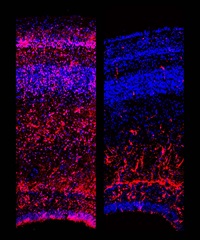 A thyroid hormone transporter is essential for the earliest stages of brain development, according to a JNeurosci study of a region of the developing chicken brain with a layered structure similar to the human cerebral cortex.

Monocarboxylate transporter 8 (MCT8) deficiency in humans results in a rare neurological disorder called Allan-Herndon-Dudley Syndrome. The deficiency prevents thyroid hormones from facilitating proper development of the cortex. Although a role for MTC8 has been demonstrated at the blood-brain barrier and in the formation of neural circuits, it has not been established at the role of progenitor cells before they differentiate into neuronal and glial cells.

Veerle Darras and colleagues studied the development of the optic tectum in chick embryos, a layered region that shares features with the mammalian cerebral cortex. By genetically modifying MCT8 expression, they found that MCT8-deficient cells failed to migrate to the outer layers of the optic tectum. In addition, the MCT8 deficiency disrupted the cell cycle and reduced the generation of new cells. Based on these findings, the authors suggest that brain lesions in Allan-Herndon-Dudley Syndrome may originate before birth and treatments may therefore need to be started prenatally as well.