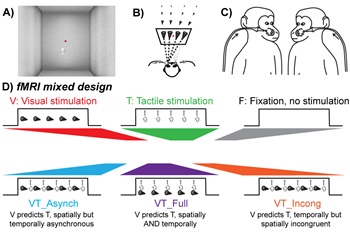 A neuroimaging study of two monkeys published in JNeurosci identifies a brain network that tracks the location of an object approaching the face and anticipates its potential consequences upon making contact with the body.

Using functional resonance magnetic imaging in two resus monkeys, Suliann Ben Hamed and colleagues found a brain network linking occipital, parietal, premotor and prefrontal regions that is maximally activated when a virtual cone rapidly approaching the monkey was paired with a puff of air to the monkey's cheek, delivered when the object would be expected to reach the face in a real-world setting. Activation of this network was weak when there was a mismatch between the air puff and the location of the cone, or when either stimulus was presented by itself. This finding suggests that the network actively used visual and to predict tactile information and enhance its processing, which may help the animal prepare for an imminent impact.

Article: The prediction of impact of a looming stimulus onto the body is subserved by multisensory integration mechanisms