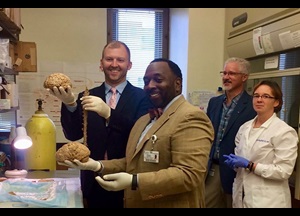 SfN member Christopher Cowan and his colleagues at the Medical University of South Carolina (MUSC) showed off their brains (literally) earlier this month when hosting an interactive lab tour for a senior staffer for Sen. Lindsey Graham (R-S.C.). Daniel Head, a regional director for the senator, saw firsthand the incredible neuroscience research made possible through NIH support.

Christopher Cowan is a William E. Murray Endowed Chair in Neuroscience and the Vice-Chair of the Department of Neuroscience. Cowan’s research at MUSC explores the mechanisms that control proper brain wiring during development.

During the four-hour tour, Head visited MUSC’s neuroscience research facilities including the Human Brain Recovery and Rehabilitation Labs and the Alcohol Research Center and learned about the sweeping impact of NIH funding on research at the institution. 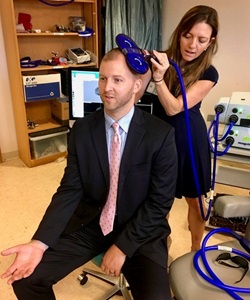 Using Head as their subject, lab members demonstrated transcranial magnetic stimulation (TMS), which uses magnetic fields to stimulate nerve cells in the brain, triggering movement in his arm. This technology will help scientists to map brain function and has the potential to treat disorders such as Parkinson's disease, chronic pain, and depression.

Cowan encouraged other SfN members to host lab tours for their members of Congress and their staff, saying the experience was well worth the effort.

“Advancing our field goes well beyond the lab,” Cowan said. “Part of our obligation as scientists must be ensuring that policymakers understand the significant impact that NIH, NSF, and other agencies that fund scientific research have on our nation’s health and economy. While it seems intimidating at first, both legislators and their staff are genuinely impressed by the work we do, which has a major impact on how they view the sciences.”

If you’re interested in scheduling a tour of your lab with your member of Congress or their staff, contact SfN staff at advocacy@sfn.org to help you coordinate.