Society for Neuroscience - Brain Lays Foundation for Reason in Childhood

Structural connections between frontal and parietal areas in children’s brains can predict their ability to reason later in life, reports new research published in The Journal of Neuroscience. 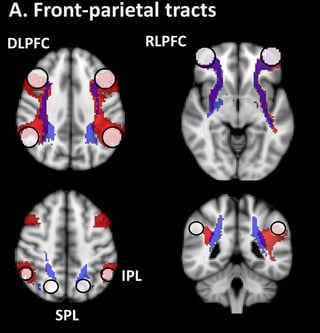 Carter Wendelken, Silvia Bunge and colleagues previously found that coordinated activity of the rostrolateral prefrontal cortex (RLPFC) and inferior parietal lobe (IPL) is associated with the ability to solve novel problems in adolescents 12 years of age and older. However, it remained unclear whether this functional connectivity is preceded by or drives the development of white matter connections (structural connectivity) and how these changes related to reasoning ability.

Analyzing longitudinal data from multiple studies of children ages 6 to 22, the researchers found that strong structural connectivity between RLPFC and IPL in younger children is associated with both increased functional connectivity and improved reasoning in adolescence and adulthood. The results suggest that the anatomical connection between these regions develops during the early school years and enables coordinated brain activity that supports an important cognitive function later in life.