Mild hearing loss from exposure to less than one hour of loud noise leads to a reorganization of circuits in a key midbrain structure of the auditory system in mice, finds new research published in The Journal of Neuroscience. However, exposure to moderate white noise for seven days immediately following loud noise prevented the reorganization of these circuits and related hearing deficits in some mice.

Karl Kandler and colleagues found that about half of mice exposed to high sound pressure levels (116 decibels) for 45 minutes were unable to detect silent gaps in background sound one week later. This gap detection deficit is interpreted in animal models as a sign of tinnitus (perceived ringing or other sound in the ear), which commonly develops after hearing loss. In both animal models and humans, tinnitus is associated with elevated activity in the inferior colliculus (IC).

Following noise exposure, the IC circuits in mice with gap detection deficits became more excitatory, which may contribute to IC hyperactivity. The authors were able to prevent these changes by exposing mice to white noise at moderate intensity (75 decibels), suggesting that noise-induced hearing loss reopens a sensitive period in the IC that could be targeted by sound therapy to treat tinnitus. 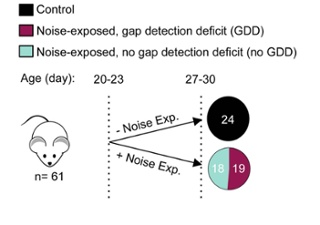