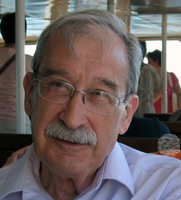 Rainer (Ray) W. Guillery died after a short illness in Oxford, England, on the evening of 7 April 2017. He was 87. Ray had a long, productive, and impactful career as a neuroscientist. He concentrated on the area of thalamocortical organization with respect to both development and adult function. Among his accomplishments were helping to define the early critical period, demonstrating the developmental anomaly in visual pathways associated with albinism, and working out details of thalamic circuitry and thalamocortical organization, including the discovery of cortico-thalamo-cortical pathways linking cortical areas. Ray held professorships in England and the US, including at University College London, the University of Wisconsin, the University of Chicago, and Oxford University; at the time of his death, he was an Emeritus Research Fellow at Oxford University. Among his other efforts, he was a past Treasurer of the Society for Neuroscience and was Editor-in-Chief and Founding Editor of the Journal of European Neuroscience. Ray was also a Fellow of the Royal Society (London). He is greatly missed by many students and colleagues whom he mentored and befriended.

Read Ray Guillery's chapter in The History of Neuroscience in Autobiography Volume 2.