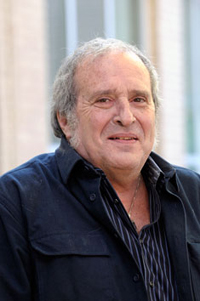 Networks of friends and colleagues from the Philadelphia area and around the world join the Bryn Mawr community in mourning the loss of Eleanor A. Bliss Professor of Biology Paul Grobstein, who died last Tuesday, June 28. The College will host a memorial service for Grobstein this fall.

A neurobiologist by training, Grobstein was profoundly committed to opening the discussion of science and scientific topics to all. He made major contributions to the creation of Serendip, the first website hosted by Bryn Mawr College; Bryn Mawr's Center for Science in Society; and the Summer Institutes for K-12 Teachers. His characterization of the scientific method as " getting it less wrong "; a creative process of constant revision that embraces mistakes and resists hierarchy, sparked countless discussions across social boundaries of all kinds.

It is with deep sadness that I share the news that Paul Grobstein, Eleanor A. Bliss Professor of Biology, passed away Tuesday, 28 June 2011.

Paul earned his B.A. in biology at Harvard University and an M.S. and PhD in biology from Stanford University. Prior to coming to Bryn Mawr in 1986, Paul was an associate professor and research associate at the University of Chicago. At Bryn Mawr, Paul's teaching included courses ranging from Introductory Biology to Philosophy of Science taught with Michael Krausz, to Evolution of Stories with Anne Dalke, and The Brain and Education, cross-listed with the education department.

Paul founded the Summer Institutes for K-12 Teachers, which have brought hundreds of local educators to campus to consider new ways of teaching science and math. He served as chair of the biology department and was instrumental in the establishment and success of the Center for Science in Society. During his tenure, Paul supervised a dozen graduate and postgraduate students and in 1998 received the Rosalyn R. Schwartz Teaching Award for teaching excellence and campus leadership.

According to his colleagues, Paul's greatest legacy may be his absolute conviction and devotion to the notion of breaking down barriers between disciplines and building interdisciplinary interactions. Paul's extensive cross-departmental teaching is evidence of this commitment, as is Serendip, which he co-founded in 1994.

Designed as " a gathering place for people who suspect that life's instructions are always ambiguous and incomplete, and hence need to be continually examined and rewritten", Serendip has a world-wide audience and is linked to many other sites in the areas of neurobiology, cognitive science, science education, and science and culture.

Paul said his many interests and activities shared in common ³a strong belief in the capabilities of the human brain to explore and create, both individually and collectively, in ways that achieve improved understandings of the human condition and open new avenues for its further development. And a belief that modern information technology, including the web, is a distinctive and valuable tool for the extension of human understanding.

One friend and colleague writes, " Paul was a man who loved thinking about and playing with ideas. He thoroughly enjoyed both telling stories and evoking them from others, in order to urge revision (both of the stories and of the people telling them!). He had a particular interest in what he called slippery brains: those that change states frequently and rapidly, making it disconcerting to others and (sometimes?) to oneself. He was the smartest person, deepest skeptic, and most profound believer in others' potential that I have ever had the pleasure to know, or the joy to work with.

A biology colleague called Paul ³an exemplary member of the Bryn Mawr College community, not just the department² and recalled the mentoring he provided Peter Brodfuehrer and Wil Franklin.

Paul is survived by his twin children, son Jed Grobstein and daughter Rachel Grobstein. The College has established a fund in Paul's honor and will accept donations to Bryn Mawr College care of the Paul Grobstein Memorial Fund. Contributions will support the future of Serendip.