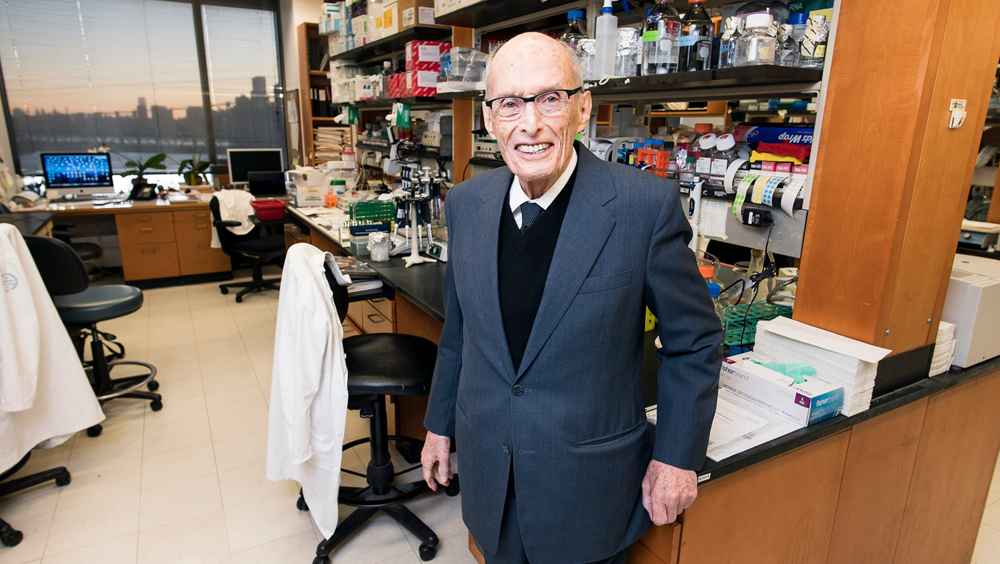 Paul Greengard, an American neuroscientist whose 15-year quest to understand how brain cells communicate provided new insights into psychological diseases and earned him a Nobel Prize, and who used his entire $400,000 award to create an academic prize in memory of the mother he never knew, died on Saturday in Manhattan. He was 93.

His death was confirmed by Rockefeller University, where he had worked since 1983.

Dr. Greengard received the 2000 Nobel Prize in Physiology or Medicine with Dr. Arvid Carlsson of Sweden and Dr. Eric R. Kandel of the United States for independent discoveries related to the ways brain cells relay messages about movement, memory and mental states. Their discoveries offered new insights into disorders linked to errors in cell communication, such as Parkinson’s disease, schizophrenia, bipolar disorder and drug addiction.

Dr. Greengard’s research described how cells react to dopamine, an important chemical messenger in the brain. His work provided the underlying science for many antipsychotic drugs, which modulate the strength of chemical signals in the brain.

“Our work shows the details of how dopamine produces these effects — in other words, what’s wrong in these diseases and what can be done to correct them,” Dr. Greengard said.

Dr. Greengard’s research extended from the late 1960s to the mid-1980s. For much of the period, his work was ignored. A majority of biologists believed brain cells communicated through the use of electrical signals. To them, the only thing that mattered was whether a cell fired off a signal.

“There was a point when I thought they would not be accepted in my lifetime,” Dr. Greengard said in a 2011 interview, referring to the results of his many experiments.

Ultimately, Dr. Greengard showed that electrical and chemical signaling worked in tandem. He discovered that chemical groups called phosphates within cells trigger a cascade of chemical changes that amplify the dopamine signal. This response, in turn, makes it possible for cells to fire electrical signals. Today the field he pioneered, called signal transduction, is an important area of study.

Paul Greengard was born on Dec. 11, 1925, in Brooklyn. His father was a vaudeville performer who became a perfume salesman; his mother, a homemaker, died giving birth to him. When Dr. Greengard was 13 months old, his father, who was Jewish, married an Episcopalian who raised Dr. Greengard and his two sisters in the Christian tradition. He did not know about his mother until he was in college; he needed information about his family background to fill out a form.

He felt the loss of his mother deeply; he had no mementos of her, not even a photograph. After he received the Nobel Prize, he used his $400,000 award to establish the Pearl Meister Greengard Prize for women in biomedical research, in honor of his mother.

“Since there’s not a shred of physical evidence that my mother ever existed, I wanted to do something to make her less abstract,” he told The New York Times in 2006.

He attended public schools in Brooklyn and Queens, graduating from Forest Hills High School. He enlisted in the Navy, which sent him to electronic technician school and then assigned him to a team at the Massachusetts Institute of Technology that was working on an early-warning radar system to protect American ships during World War II.

After his military service, he went to Hamilton College, a small liberal arts school in Clinton, N.Y., where he majored in physics and mathematics. His father and stepmother did not want him to attend college — “They were both very anti-intellectual,” he told an interviewer — but the G.I. Bill covered his tuition. He received his bachelor’s degree in 1948 and made plans to go on to graduate school.

He was drawn to theoretical physics, but was concerned about conducting research that might contribute to the development of nuclear weapons, an emerging area of postwar research. “I thought there were better ways of spending my life than trying to destroy mankind,” he said.

So he entered the nascent field of biophysics, which uses math and physics to solve biological problems. Though most biophysicists were studying electrical signaling in nerve cells, he chose to study chemical signaling, figuring it would be easier to make a mark in a less developed field.

Dr. Greengard received his doctorate in 1953 from Johns Hopkins University, one of the few institutions that offered a degree in biophysics at the time. After five years of postdoctoral work and a stint in the pharmaceutical industry, he joined the Yale University faculty in 1968. He moved to Rockefeller University in 1983 and spent the rest of his career there.

Toward the end of his life, his research turned to understanding the cell signaling defects in specific disorders, including Alzheimer’s disease, Parkinson’s disease, schizophrenia and depression.

Before Dr. Greengard went to Yale, he spent a several months at Vanderbilt University working with Dr. Earl Sutherland Jr., an eminent biochemist. Dr. Sutherland had made important discoveries about the chemical signaling that takes place in fat and muscle cells in response to messages from hormones; he went on to receive the 1971 Nobel Prize in Physiology or Medicine for this work.

“No one was terribly interested — it wasn’t ready for prime time,” Dr. Greengard said, recalling reactions to his ideas in a 2000 interview with The New York Times. “People said, ‘Poor Paul, I’m sure he’ll find his way back onto the right path.’”