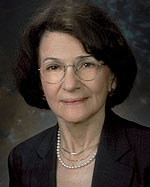 " Pat Goldman-Rakic was one of the most distinguished neuroscientists of her generation. " said Yale President Richard C. Levin. " We grieve her tragic loss in the knowledge that her important contributions to science will live on. "

Considered a pioneer in the area of memory function, Goldman-Rakic’s research also paved the way for scientists to understand the neurobiological basis of normal behavior and of diseases such as schizophrenia, Alzheimer’s, Parkinson’s and attention deficit-hyperactivity disorder. Goldman-Rakic brought a unique multidisciplinary approach to the study of the frontal lobe, a region of the brain once viewed as inaccessible to rigorous scientific analysis. She was the first to discover and describe the exquisite order and structure of this brain region, which is responsible for the highest level of cognitive functions.

Dr. Herbert Pardes, President and CEO of New York Presbyterian Hospital and former Dean of Columbia University College of Physicians and Surgeons said, " Pat Goldman-Rakic was one of the most outstanding neuroscientists. She linked important issues in behavior and clinical psychiatry to basic science. She was truly a pioneer and a leader of our time. "

Paul Greengard, professor of Rockefeller University and Nobel Laureate in Physiology and Medicine said, " Patricia Goldman-Rakic raised the quality of multidisciplinary brain research to a new level. She utilized biochemical, electrophysiological, pharmacological, anatomical and behavioral techniques to elucidate much of what we know today about memory, behavior and the actions of anti-schizophrenic drugs. Her work has provided a foundation for understanding schizophrenia and other mental disorders. "

Among her seminal discoveries was the demonstration that cells in the prefrontal cortex are dedicated to specific memory tasks. Goldman-Rakic’s recent research at Yale focused on the role of signaling molecules and their involvement in a number of brain disorders and cognitive deficits. In the 1970's, she found that the loss of dopamine in the prefrontal cortex produced profound working memory deficits. This study changed the view of neuropsychiatry, and helped provide a rational basis for understanding the symptoms of mental illness and the effects of psychoactive medications. More recently, she discovered and sought to understand how a brief period of amphetamine abuse in early adolescence or early adulthood can produce long-lasting cognitive deficits.

Her studies of dopamine receptors in the brain have provided important insights into potential treatments for schizophrenia and Parkinson’s disease. For example, she and her colleagues identified the protein Calcyon, which may be a new target for drug development to improve the signaling in cells that are otherwise desensitized to dopamine. This is particularly important because many of the current drugs for these disorders have negative side effects after long-term use.

" The world of neuroscience has lost a formidable ally in the search for a deeper understanding of the human brain, " said Susan Hockfield, Provost of Yale University and the William Edward Gilbert Professor of Neurobiology. " Not only was she a dedicated and brilliant researcher, she was also a great and beloved mentor to many junior researchers. Her discoveries and insights into brain function have forever changed our understanding of the mind and the brain. "

The author and collaborator on hundreds of scientific papers, Goldman-Rakic won many awards and honors for her work. She was elected to the National Academy of Sciences in 1990 and was President of the Society for Neuroscience from 1989-90. She was a member of the American Academy of Arts and Sciences and the Institute of Medicine and she was a fellow of The American Psychological Association.

Her many awards and honors include the Karl Lashley Award from the American Philosophical Society; the Leiber Award from the National Alliance for Research on Schizophrenia and Depression; Distinguished Scientific Contribution Award from the American Psychological Association; a Merit Award from the National Institute of Mental Health; the Fyssen Foundation Prize in Neuroscience; and the Alden Spencer Award from Columbia University. She received honorary degrees from the University of Utrecht, Netherlands, and the University of St. Andrews, Scotland. She founded the journal Cerebral Cortex, and served on editorial boards for the journals Science, Advances in Neuroscience, Behavioral Brain Research, Concepts in Neuroscience, Biological Psychiatry and many others. She also held numerous advisory positions, including at the NIH, the NIMH, the Weitzman Institute, Israel, and other institutions. She was an invited lecturer at universities, research centers, conferences and symposia around the world.

Goldman-Rakic is survived by her husband, Pasko Rakic, M.D., a fellow distinguished neuroscientist at Yale and a sister, Ruth Rappaport, also a scientist. She was predeceased by a sister, Linda Shoer.

A private graveside service for close friends and family will be held at the Grove Street Cemetery in New Haven, on Sunday, August 3 at 11 a.m. A memorial service in Dr. Goldman-Rakic’s memory will take place in September. In lieu of flowers, memorial contributions may be made to NARSAD, National Alliance for Research on Schizophrenia and Depression, 60 Cutter Mill Road, Suite 404, Great Neck, N.Y. 11021.