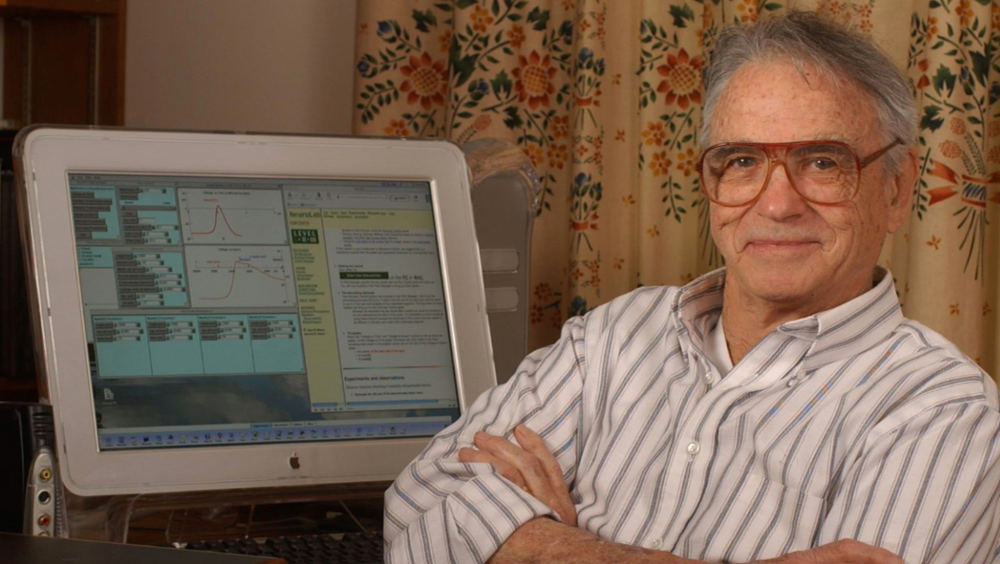 John Wilson Moore, Duke Professor Emeritus of Neurobiology, died on March 30. He was 98. Moore was a biophysicist who made important contributions to understanding neurotoxins and the action of anesthetics and was a pioneer in the field of computational neuroscience.

John Moore was born on November 1, 1920, in Winston-Salem, NC. He graduated from Davidson College in 1941 and received his Ph.D. in physics from the University of Virginia in 1945. At the time, UVA was part of the Manhattan Project, and Moore’s graduate work was directed toward the war effort. He assisted in the effort to enrich uranium by centrifuge, and he helped design feedback circuits to point ships’ guns at attacking airplanes based on radar, a newly developed technology. Feedback (servo) systems became a constant motif in his life’s work.

Moore’s first job was at the RCA Laboratories where Art Vance, a master engineer, introduced him to operational amplifiers (op-amps) and the importance of thinking in terms of current rather than static charge. He began thinking dynamically about currents flowing in and out of capacitors and how op-amps could be used in biophysics.

In 1950, Moore moved to the Medical College of Virginia (MCV) where he began to apply his knowledge of physics to biological problems. His presentation at a meeting caught the eye of the biophysicist K.S.Cole, who had spent summers studying nerve activity at the Marine Biological Laboratory (MBL) in Woods Hole, MA. Attracted by the idea of doing research at this scientific institution on the water, Moore readily accepted an offer from Cole to lead his lab at the Naval Medical Research Institute, but only in exchange for a promise to do research at the MBL in summers. From then until the end of his life, Moore returned to the MBL every year, 67 summers in all, and was a passionate windsurfer in Woods Hole waters until age 80. Moore ran Cole’s lab at the NMRI and later at the National Institutes of Health until 1961.

Cole’s invention of the voltage clamp technique for measuring electrical currents in neurons enabled Alan Hodgkin and Andrew Huxley to solve the problem of how neurons generate and propagate signals, for which they won the Nobel prize in 1963. Moore mastered Cole’s technique and, using his experience in electronics and feedback, engineered several improvements in the quality of measurements in the standard voltage clamp technique. He then developed a vastly improved voltage clamp method, the sucrose gap.

In 1961, Dan Tosteson recruited Moore to the Physiology Department at Duke. There, Moore used his sucrose gap technique to study the actions of various neurotoxins with collaborators from around the world. Most notably, he and Toshio Narahashi discovered the mechanism by which tetrodotoxin (TTX), the puffer fish venom, blocks nerve signals: by selectively blocking the ion channels that permit sodium ions to enter the cell. While anesthetics like Novocaine had been used since the early 1900s to block nerve conduction, this discovery was seminal in revealing how they actually worked. The finding also provided the first hard evidence that ion channels in nerve cells were pore forming proteins. For this and other work, Moore received the Cole Award from the Biophysical Society in 1981.

Moore was an early visionary in applying minicomputers in the laboratory to simulate electrical signals in neurons. In the late 1960’s, with help from student programmers and using the Hodgkin-Huxley equations as a basis, he began to run computer simulations in parallel with each lab experiment. This groundbreaking method of combining theory and experiment proved highly successful both in predicting the outcomes of experiments and in showing that the equations had wider applicability than previously known. With Michael Hines he developed the neuronal simulation software NEURON, which remains one of the most popular tools for computational neuroscience instruction and research. NEURON allowed Moore and his students and postdocs to understand how the geometry and myelination of a neuron determine the movement of its signals throughout the cell. Hines currently maintains NEURON at Yale University.

After his retirement from Duke in 1990, Moore focused his efforts on neurophysiology education. With his wife, Ann Stuart, a neurobiologist at the University of North Carolina at Chapel Hill, he developed Neurons in Action, a digital textbook that includes interactive simulations of classic experiments using NEURON. It is now widely employed to teach neurophysiology in the USA and internationally.

Throughout his life, Moore struck up friendships wherever he went. He was beloved by family, colleagues, employees of the institutions he worked at, musicians he admired, and the many caregivers he had during his final year.

A memorial service will be held on Saturday May 4, 2019, at 2 PM, at the Church of Reconciliation in Chapel Hill, NC.

In memory of John Moore, donations can be made to the Thomas B. and John W. Moore Scholarship Fund at Davidson College or to the The John W. Moore and Ann E. Stuart Endowed Fund at the Marine Biological Laboratory.

Read John Moore's chapter in The History of Neuroscience in Autobiography Volume 7.