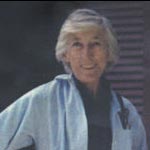 Dorothea Jameson, the University professor of psychology and visual science who was one of the world' foremost theorists of color and vision, died April 12 in New York City of lung cancer at the age of 77.

She was the wife and colleague for 50 years of Dr. Leo M. Hurvich.

They have summered in Truro since the late 1950s.

After renting a cottage near Highland Light in North Truro in 1957, Professor Jameson and her husband had Luther Crowell build their summer home in 1959 on the Highland Cliff about a mile south of the light, an ideal location for work, play and relaxation.

A 1942 graduate of Wellesley College, Professor Jameson began work on sensory processes during her second year in college and, graduating into the World War II research environment, continued to work on perception as a research assistant at Harvard. One of her main projects at Harvard was aimed at improving the accuracy of visual range finders.

Professor Jameson met Leo Hurvich at Harvard, where they began the collaboration that would take them to Eastman Kodak in Rochester, to the psychology department of New York University from 1957 to 1962 and to their long-time academic home in the University of Pennsylvania's department of psychology and Institute of Neurological Sciences. Beginning as a research associate during a time when the university had a nepotism rule, she was named a full professor after the rule was discontinued. In 1957 she was awarded an endowed chair as University Professor of Psychology and Visual Science. She also held visiting positions at Rochester and Columbia Universities. Teaching both undergraduate and graduate students gave her intense delight and satisfaction. In addition to memberships in a number of professional associations, she was elected to the Society of Experimental Psychologists in 1970, a fellow of the American Academy of Arts and Sciences in 1976 and to membership in the National Academy of Sciences in 1975. She chaired the psychology section of the National Academy of Sciences from 1983 to 1986 and served on many of its committees and boards. From 1975 to 1979 she served on the NIH Visual Sciences B Study Section and from 1985 to 1989 was on the NIH-National Advisory Eye Council of the National Eye Institute.

Among her many other professional and scholarly roles were her service on the visiting committees of MIT, Maryland and Harvard on the U.S. National Committee for the International Union of Psychological Science; and on the Woods Hole Oceanographic Institute Corporation Board. Professor Jameson won the 1971 Warren Medal of the Society of Experimental Psychologists; the 1972 distinguished Scientific Contribution Award of the American Psychological Association and the 1973 Godlove Award for Research in Color Vision of the Inter-Society Color Council. In 1974, she received the Wellesley College Alumnae Achievement Award for Scientific Research. She also won the Edgar Tillyer Award of the Optical Society of America in 1982 for Distinguished Work in the Field of Vision; the Deane B. Judd Award of the Association Internationale de Couleur in 1985; and the Hermann von Helmholtz Award of the Cognitive Neuroscience Institute in 1987. She contributed to the History of Psychology in Autobiography in 1989. In the same year the State University of New York conferred upon her the honorary degree Doctor of Science. During her career, Professor Jameson published some 95 papers in her field, writing frequently with Hurvich, in a collaboration that Columbia Professor David H. Krantz, who took his Ph.D. with Professors Jameson and Hurvich 35 years ago, described as "remarkable for quality, length and equality of contribution." They moved to Eastman Kodak in 1947 and married in 1948 to begin their pioneering and profound study of color perception. Dr. Krantz said: "The dominant scientific orthodoxy of that time decreed that subjective appearance could not be studied scientifically at all. Jameson and Hurvich were the first to use subjective appearance of colors as a "guide to rigorous, quantitative experimentation.

In the 19th century, the physiologist Ewald Hering had postulated opponent, bi-directional neural processes correlated with perceived colors but the scientific establishment scorned it. "Based on their measurements, using a 'cancellation technique,' say red vs. green and yellow vs. blue, Jameson and Hurvich proceeded to construct a quantitative model, opponent-color theory, that embraced all the known facts of color vision about color matching, color discrimination, contrast, adaptation and color weakness or color blindness, as well as the subjective appearance of colors.

"Theirs was the first truly comprehensive quantitative model. For a time it was controversial and widely misunderstood. Today there is still no comprehensive model with the scope of their original theory. The projects that she undertook independently of Leo tended to focus either on visual physiology or on modern art. On the physiological side, she paid close attention to advances in visual physiology and their implications for perception. The discovery of bi directional opponent processes in fish retina led her to undertake her own studies of color vision in fish. Another main interest was the function of retinal nerve cells that integrate inputs over different-sized areas and their role in perceptual averaging of colors versus perceptual contrast. She was an art lover who also had strong intellectual interests both in the history of art and in the relationships of visual effects, found in art works, to the physiology of vision. To mention one example, she pointed out how the differences in area of integration between peripheral and central retina contributed to the aesthetic effects obtained by impressionist painters. Jameson's students, colleagues and friends will greatly miss her gentle manner, her luminous, probing intelligence, her scientific wisdom and her love for truth. Shortly after Professor Jameson's death, Professor Maureen Powers of Vanderbilt University spoke briefly about her at the annual meeting of the Association for Research in Vision and Opthamology. Dottie served as a powerful mentor, both formally and informally to many in this room, an inspiration to many others and a good friend to even more," said Powers; "She was a powerful intellect, an unrelenting but fair critic, a faithful and caring friend." Article courtesy of The Advocate, Thursday, July 30, 1998