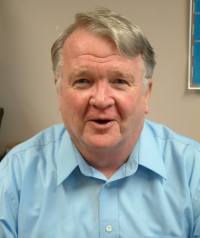 Dennis Higgins, an internationally known developmental neurobiologist, respected colleague and cherished mentor at the State University of New York (SUNY) at Buffalo, passed away on January 6, 2006. Born in 1947, he was 58 years old at the time of his death from pancreatic cancer. He is survived by his wife Cheryl (Cher), daughter Kerry, son-in-law Jake Cassel, son Derek, granddaughter Kayle, and sister Maureen Gonsalves of Chicago.

Dennis grew up in Boston, MA and graduated in 1969 from Boston College with a BA in Psychology. After an initial stint in politics (a lifelong interest he would pursue with any obliging graduate student working in the lab at night) he spent several years working with patients suffering from mental illness. The latter experience catalyzed an interest in mechanisms underlying the etiology and treatment of complex neurological disorders, which led Dennis to the graduate program in pharmacology at the University of Connecticut Health Sciences Center. There he earned his PhD in 1980 for his studies of adrenergic innervation of the developing chick heart under the guidance of Andrew Pappano (Higgins and Pappano, 1979, J Mol Cell Cardiol 11:661-668). His interest in the developing autonomic nervous system was extended as a postdoctoral fellow at Washington University School of Medicine in Saint Louis, MO in the laboratory of Harold Burton. During that period (1980-1983), Dennis' work, which was significantly influenced by interactions with Dick and Mary Bunge, focused on developing techniques for culturing primary rat sympathetic neurons (Johnson et al., 1981, Ciba Found Symp 83:108-22) and characterizing their neurotransmitter phenotype and synaptic properties. The latter resulted in a series of papers demonstrating that the neurochemical and morphological properties of these neurons were relatively plastic and strongly influenced by extracellular cues (Higgins et al., 1981, J Neurosci 1:126-31; Higgins and Burton, 1982 Neuroscience 7:2241-53; Higgins et al., 1984, Brain Res. 316:71-82). These novel observations countered the then prevailing view that these neuronal properties were intrinsically determined, and they served as the basis for much of Dennis' subsequent work.

Dennis joined the faculty of the Department of Pharmacology and Toxicology at SUNY at Buffalo School of Medicine as an assistant professor in 1983 and was promoted to full professor in 1997. During his more than twenty years at SUNY at Buffalo, Dennis successfully exploited the culture model he helped to develop to make significant contributions to our understanding of the cell and molecular mechanisms regulating neuronal morphogenesis. One perplexing paradox at the time was that sympathetic neurons cultured in the absence of serum survived and elaborated extensive axonal arbors, but failed to make dendrites unless co-cultured with glia (Bruckenstein and Higgins, 1988, Dev Biol 128:324-36 and 337-48; Tropea et al., 1988, Glia 1:380-92). In a series of collaborative studies with Pamela Lein, Dennis identified bone morphogenetic proteins (BMPs) as extrinsic signals that trigger dendritic growth in sympathetic neurons (Lein et al., 1995, Neuron 15:597-605), an observation subsequently extended to central neuronal cell types (Le Roux et al., 1999, Exp Neurol 160:151-63; Withers et al., 2000, Eur J Neurosci 12:106-16. These studies provided the first evidence that this important family of growth factors regulated neuronal development. Subsequent work in Dennis' lab resulted in novel observations of BMP signaling such as the requirement for proteasome activity (Guo et al., 2001, J Neurobiol 48:120-30) and the integrative nuclear FGFR1 signaling pathway (Horbinski et al., 2002, J Neurochem 80:54-63) in BMP-induced dendritic growth; the antagonistic effect of the Jak/STAT (Guo et al., 1999, J Neurosci 19:2113-21; Kim et al., 2002, J Neurosci 22:4530-9) and ERK/MAP signaling pathways (Kim et al., 2004, J Neurosci 24:3304-12) on dendritic growth triggered by BMPs and the first report of non-canonical BMP signaling involving the rapid and differential regulation of two ionotropic glutamate receptors independent of nuclear regulatory activity (Shen et al., 2004,  Eur J Neurosci 20:2031-7), which may be important in explaining the neuroprotective effects of BMPs in ischemic stroke.

Dennis' research interests were not limited to neuronal morphogenesis but rather were cast wide across multiple scientific disciplines. It was common for new students in the lab to be handed a coffee-stained paper on a topic new to the laboratory and asked by Dennis to " just run a few experiments " to test an idea occurring to him after he read the paper late the night before. This approach proved a great learning experience for the student and remarkably resulted in a number of successful collaborations both within and beyond SUNY at Buffalo. Collectively, these long shots led to unique insights across diverse fields such as observations suggesting novel mechanisms contributing to the pleiotropic effects of statins; specifically that statins decrease sympathetic activity by decreasing dendritic arborization in sympathetic neurons consequent to blocking RhoA activation (Kim et al., 2009, J Neurochem 108:1057-71); and that statins attenuate neurogenic inflammation by downregulating proinflammatory neuropeptide expression in sensory ganglia via cholesterol depletion and decreased Smad1 activation (Bucelli et al., 2008, J Pharmacol Exp Ther 324:1172-80). Another example from his later work was the result of a series of collaborative studies with William Ruyechan (SUNY at Buffalo) that identified unexpected effects of herpes simplex virus 1 latency associated transcripts on neuronal morphogenesis and neuropeptide synthesis and the influence of BMPs on these interactions (Hamza et al., 2006, Neurobiol Dis 24:367-73; Hamza et al., 2007 J Neurovirol 13:56-66; Hamza et al., 2007, Neurosci Lett 413:31-5; Hamza et al., 2007, Neurobiol Dis 25:553-60).

Dennis’ breadth of scientific knowledge was well recognized and appreciated: he was tapped several times to serve as program director for Developmental Neuroscience for the National Science Foundation (NSF) and served as a member of the NSF Science and Technology Center Review Panel and the NSF Developmental Neuroscience Scientific Advisory Panel. He also was an ad hoc and standing member of study sections for the National Institute of Neurological Disorders and Stroke and a member of the editorial board for Biomedical Research. But perhaps more telling of his abilities as a scientist and educator, Dennis was a much sought after PhD advisor who successfully mentored 12 PhD students, many of whom are now independent faculty or leaders in industry. Students and colleagues alike appreciated his keen intellect, his ability to cut to the heart of the matter, his passion for science and his sense of humor - Dennis appreciated clever puns and practical jokes, one of his favorites being the time he placed an order through the university's purchasing system for a Belly Dancer, purposefully neglecting to specify that this was the trade name for a platform rocker.

Dennis' life encompassed much more than his professional career. He was devoted to his family and his church and was very active in community service, regularly helping out at the local soup kitchen and donating significant time to mentoring in his children’s schools. He loved to travel and one of his travel highlights was a trip to Ireland with the James Joyce book club in which he was an active participant. Dennis' love of life was manifest in all his personal and professional relationships, he had a knack for promoting those around him and he delighted in the success of family members, colleagues and students. His “bonhomie” approach to science and life is what those fortunate enough to have called Dennis Higgins colleague, mentor and friend will miss the most.