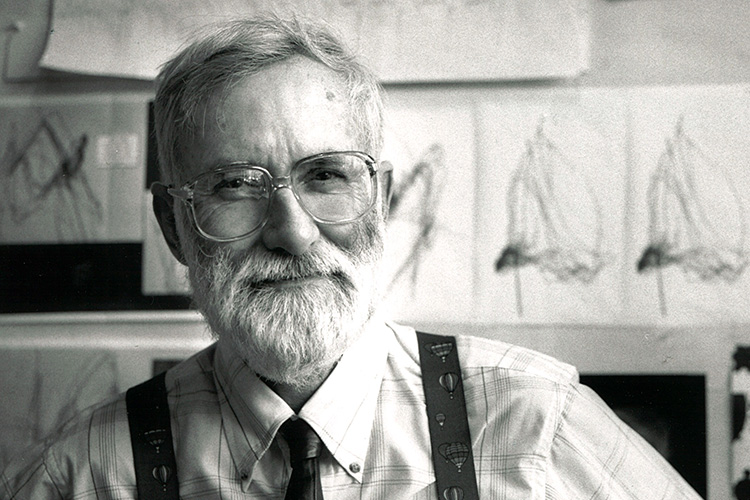 Walter J. Freeman III is known for his pioneering work on brain dynamics and neural networks and is considered to be one of the founders of the discipline of Computational Neuroscience. His insight into brains was rooted in studying the mammalian olfactory system, and many of his ideas were decades ahead of the rest of the field. He focused on both spatial and temporal aspects of neural masses beginning in 1959 and studied the mechanisms of fast cortical oscillations after their discovery by Adrian. He is credited with reviving the term ‘gamma waves’ to refer to these oscillations, and he was the first to model oscillatory evoked potentials in the olfactory system as an interplay between excitatory and inhibitory neural populations in the prepyriform cortex (1964), which formed the foundation for his later models of gamma oscillations. Freeman’s field theory focused on how emergent states within large cortical networks can constrain the activity of individual neurons. These ideas are explained in his book Mass Action in the Nervous System (Academic Press, 1975), one of the first texts to use mathematics to describe brain dynamics. He stressed that even though most neurons send signals across cortical areas via spikes, brain regions and their states which are associated with behavior and mental processes are best characterized by the mass action of hundreds of thousands of neurons as read from the local field potential. His more recent research moved from modeling olfactory networks to more extended networks, bridging to chaotic systems, neuropercolation theory and quantum states. His philosophical work dealt with the self-organization of brain processes in interaction with the environment and the body.

Freeman’s honors include a Guggenheim fellowship, Titulaire de la Chaire Solvay at Universite Libre de Bruxelles, a MERIT award from the NIH, the Pioneer award from the IEEE Neural Networks Council, Spinoza Lecturer at the University of Amsterdam, a lifetime achievement award from the University of Salerno Medical School, and the Helmholtz Lifetime Achievement Award from the International Neural Network Society, among many others. Dr. Freeman was President of the International Neural Network Society (1994), President of the Pavlovian Society (1997), Life Fellow of the IEEE "For the development of biologically realistic neuroengineering models based on nonconvergent dynamics," and fellow of the International Neural Network Society. He was an Honorary Professor of Fudan University, Shanghai, and Zheijang University, Hangzhou, China. He authored over 500 articles and 6 books: Mass Action in the Nervous System (1975), Societies of Brains (1995), Neurodynamics (2000), How Brains Make Up Their Minds (2001), Imaging Brain Function with EEG (2013, with Rodrigo Quian Quiroga), and Cognitive Phase Transitions in the Cerebral Cortex (2016, with Robert Kozma).

Walter Freeman trained many graduate students and postdoctoral scholars in his career; an uncountable number of scientists and philosophers in the US and across the globe count him as their teacher and mentor. He was a demanding yet generous teacher and scholar.

Walter died at home from Idiopathic Pulmonary Fibrosis, surrounded in his last days by his family and friends. To his last breath, he was educating his students and listening to new interpretations of his work. He lived a full and exuberant life and rested easy knowing this his work would continue. He was preceded in death by his wife, Do (Doreliesje) Freeman, and is survived by seven children -- Luke of Australia and Abigail, Mathew, Walter IV, Rachael, Joran and Jennifer of the United States – five step-children – Mark, Tom, Kim, Rachel and Toni of the U.S. – his first wife, Maribelle Zechlin, and 18 grandchildren.