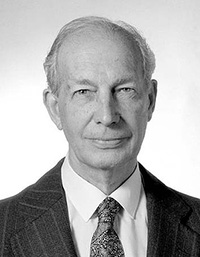 How does the brain convert the two dimensional image captured by each eye into perceptions of depth in a three-dimensional world? This has application in the study of disorders such as strabismus, where the sufferer cannot bring his or her eyes together in one point in space.

Bishop made an important contribution to the understanding of that condition and the need for proper alignment of the eyes in early childhood.

During a life dedicated to research, he built the field of visual neuroscience in Australia from nothing to an internationally recognized part of Australian science and was able to achieve significant advances in the understanding of the mechanisms of visual perception.

Peter Orlebar Bishop was born in Tamworth on June 14, 1917, second of five children of a government surveyor, Ernest Bishop, and Mildred (nee Vidal). Finishing school at Sydney's Barker College, he enrolled in medicine at the University of Sydney. He was struck by the fact that the relatively small, unassuming structure - the brain - was somehow responsible for human hopes, aspirations, thoughts and emotions.

In 1942, he married a nurse, Hilare Holmes, and enlisted in the navy as a surgeon-lieutenant serving on the cruiser HMAS Adelaide and the destroyer HMAS Quiberon, serving on convoy escorts in the Atlantic and Indian oceans, and later in the Pacific.

In 1946, Bishop was awarded a fellowship to study neurology and neurosurgery and went with his family to England, where he was inspired to pursue research in neuroscience. In 1947, he became a research fellow in the Department of Anatomy, University College London.

Returning to Australia in 1950, Bishop joined the academic staff of the University of Sydney, rising to senior lecturer in 1951 and head of the Department of Physiology in 1955.

He began studies into how an eye forms an image. His research focused on the properties of axons, neuron cell bodies and synapses in the brain, particularly those in the visual pathways and centers, and with the nature of the central organization of vision, especially the mechanisms underlying the stereoscopic binocular vision.

Much of Bishop's early work was done with the help of medical students undertaking a research project. Through his mentoring and support, many of these students went on to become leaders in the fields of neurophysiology and/or clinical neurology. By the 1960s, he was concentrating on the mechanisms for binocular vision in the mammalian visual cortex.

In 1967, Bishop moved to ANU, where he succeeded Nobel Laureate Sir John Eccles as professor and head of the department of physiology in the John Curtin school of medical research. He formed the Canberra Vision Group, where he fostered a network of young scientists from Europe, the United States, and Japan.

Bishop served on the research advisory committee of the National Health and Medical Research Council and was one of the founders of the Australian Physiological and Pharmacological Society.

In 1967, he was awarded a doctorate of science by the University of Sydney and was elected as a fellow of the Australian Academy of Science.

In 1977, Bishop was elected to the Royal Society. In 1983, he was awarded an honorary MD by the University of Sydney.

In 1986 he became an officer of the Order of Australia and in 1993 he received the Australia Prize as one of the three world leaders in visual science.

In retirement, Bishop collaborated with many of his colleagues in Australia and overseas, publishing his last scientific paper in 1996.

The University of Sydney introduced the P.O. Bishop Medal, which was awarded annually to the top student taking the bachelor of science (medical) degree.

Read Peter Bishop's chapter in The History of Neuroscience in Autobiography Volume 1.