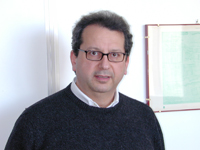 Dr. Ennio Esposito, a well known neurophysiologist and neuropharmacologist, died suddenly by heart attack, on October 23, 2011, in Guardiagrele, Italy. He had been the Head of the Laboratory of Neurophysiology at the Consorzio Mario Negri Sud, Santa Maria Imbaro, Italy, for the last 20 years.

Ennio was born in Casalincontrada (Chieti) on September 21,1955 and received his degree in medicine at the University of Chieti in 1981. As soon as he got his degree, he obtained a fellowship and moved to Milan, joining the Laboratory of Neuropharmacology at Mario Negri Institute for Pharmacological Research. He studied the neurophamacological bases of analgesia and the mechanism of action of antidepressant drugs, under the supervision of Dr. Rosario Samanin, head of the prestigious group. The cooperation was extremely fruitful, as testified by numerous publications.

In 1986 he moved to the USA to continue his scientific training and joined the Department of Psychiatry and Pharmacology at Yale University School of Medicine, New Haven, in the laboratory of Dr. Benjamin S. Bunney, where he learned the electrophysiological techniques and their application to the study of dopaminergic system. When he came back to Italy, in 1989, the Mario Negri Sud Institute had become a reality, with a new, modern Center for Biomedical and Pharmacological Research, at Santa Maria Imbaro, near Chieti. In the new Institute, just a few kilometers from his home town, Ennio set up the Neurophysiology Laboratory, using all his experience. The electrophysiological approach and microdialysis technique were intelligently combined to tackle neuropharmacological problems. He worked constantly to clarify the interactions between dopaminergic and serotonergic systems in relation to the activity of various CNS drugs. In this field he became an internationally recognized expert. He published more than 95 papers and book chapters and was editor of several books. Lately his interests were extended to neurodegenerative disorders and to the possible neuroprotective effect of dietary antioxidants in these diseaes. He collaborated with the Neuroscience Department of Milano, the Laboratoire de Neuropsychobiologie des Désadaptations, CNRS Bordeaux Cedex, France; the Istituto di Fisiologia Umana “G. Pagano”, Palermo; the Department of Biomedical Sciences, “G. D’Annunzio” University, Chieti, Italy; the Department of Psychiatry and Center for Neurobiology and Psychiatry, University of California, San Francisco, the Psychiatric Institute of Columbia University, New York, and the CNS disease research of several industries, such as Lundbeck A/S, Copenhagen, Denmark; Boehringer Ingelheim, Mainz, Germany; Sigma Tau, Pomezia,Italy.

Ennio was also an appreciated Professor at the Faculty of Psychological Sciences, University of Chieti, where he was in charge of various courses for the last 7 years. The intellectual curiosity was the main characteristic that drove his professional approach to research, conducted with rigorous methods. Teaching was his second passion, discovered when he was already an established scientist. The transfer of knowledge to the younger generations, started by chance, became an important mission, as testified by the number of young people who were trained to get a Doctoral degree in Psychology or Pharmacology, at the Universities of Chieti and Bologna.

His enthusiastic and competent approach to research has long been an example for generations of scientists who passed through his laboratory, who all retain their admiration for the man and recognize his professional achievements. Ennio was not only a brilliant scientist but a colleague and friend for many people, who want to remember his goodness, humanity and civil sense of justice. He leaves a little daughter, the beloved Ludovica.