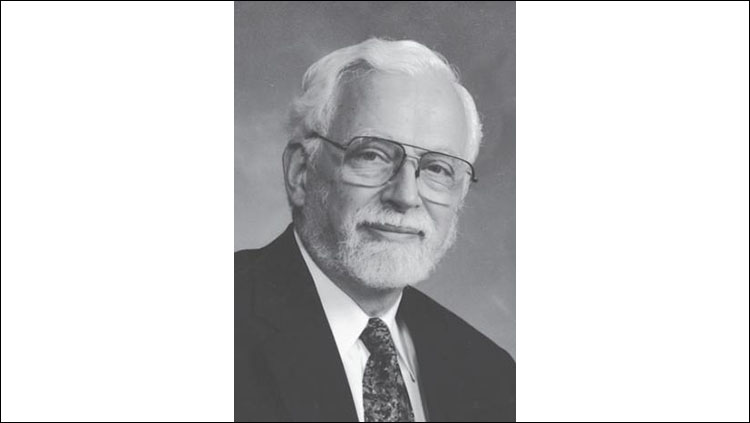 Agranoff, Bernard "Bernie" William 6/26/1926 - 10/21/2022 Ann Arbor, Michigan Bernard William Agranoff was born in Detroit, Michigan, in 1926 to William and Fagel Agranoff (nee Pelavin). He grew up with, and remained close to, his sister Annette, his whole life. Following graduation from Cass Technical High School, Bernie entered the Navy, under whose auspices he attended the University of Michigan and graduated with a degree in Chemistry, then attended Wayne State Medical School and received his M.D. in 1950. He was awarded a postdoctoral fellowship in the Department of Biology of the Massachusetts Institute of Technology. He returned to the Navy in 1952, where he served at the U.S. Naval Medical Center in Bethesda, Maryland. In 1957, he met a young woman from Boston at a party in Washington, D.C., and married Raquel Schwartz six months later. They had two sons, William and Adam, born in 1965 and 1967, respectively. Bernie made numerous contributions to the field of neuroscience during his prodigious career. He is perhaps best remembered for his work on the biochemical basis of neural plasticity, in particular his demonstration that protein synthesis was essential for the formation of long-term memory. This seminal observation, which occurred at the University of Michigan in the 1960s, was the stimulus for many prominent neuroscientists to enter the field. However, Bernie was very much a man of many scientific interests and he also made important discoveries in the field of lipid research, including elucidation of the pathway for cholesterol biosynthesis while at the Max-Planck Institute and, while at NIH, the discovery of a key precursor molecule in the synthesis of phosphatidylinositol. The latter stimulated Bernie's long-standing interest in the role played by inositol lipids in cell signaling events in the brain. Later in his career, Bernie developed an interest in neuroimaging, in addition to continuing his work on phospholipid biochemistry and neuroplasticity. He was jointly appointed in the Mental Health Research Institute and the Department of Biological Chemistry of the University of Michigan in 1960. He held the rank of Research Scientist at the Mental Health Research Institute since 1965 and served as its Director from 1985 to 1995. He also served as Director of the Neuroscience Laboratory Building until 2002. He held the rank of Professor in the Departments of Biological Chemistry and Psychiatry. In 1984 he received the University's Distinguished Faculty Achievement Award, and in 1986 was awarded the Distinguished Faculty Lectureship in Biomedical Research. In 1991 he was elected to the Institute of Medicine and later that year became the first Ralph Waldo Gerard Professor of Neurosciences at the University of Michigan. He was named 1992 Michigan Scientist of the Year by the Impressions 5 Museum, Lansing, MI. He was awarded the Distinguished Alumnus Award by Wayne State University Medical School in 1993 and became a Fellow of the American Academy of Arts and Sciences in 2002. He was known as an educator and mentor. "Basic Neurochemistry," which he co-edited for all six editions, is the authoritative treatise on neurochemistry. More than 60 graduate students and post-docs trained under Bernie. Many went on to faculty positions and successful independent careers. He was a member of various honorary and professional societies and served on the editorial boards of biochemical as well as behavioral scholarly publications. He served on the councils of the Society for Neuroscience, American Society for Neurochemistry (President, 1973-1975) and International Society for Neurochemistry (Chairman, 1989-1991). He was a member of the Midwest Council of the American Academy of Arts and Sciences. With their shared love of food, he and his wife, Ricky, along with a cadre of four other women and their partners, helped to found the Moveable Feast, a ground-breaking French restaurant located on Liberty Street in Ann Arbor. He loved to bring colleagues and visiting academics from all over the world to dine on the city's best food for many, many years. To this day, the house at 326 W. Liberty is still called "the Moveable Feast house," by many Ann Arborites despite it having passed to other hands decades ago. In his retirement, he fully enjoyed his family, world travel, gastronomic adventures, and limerick-crafting. He is remembered for his fantastic sense of humor, wry wit, kind heart, discerning palate, love of wine, ever-curious mind, and sagacious counsel. He mourned the loss of his wife, Raquel Agranoff, in 2020, and is survived by his loving sons, William and Adam, their partners, and four grandchildren, Leo, Maddy, Isaac, and Sadie. In lieu of flowers, if you wish to remember Bernie and Ricky, please make a donation to the University of Michigan Musical Society (https://ums.org/support/). A gathering and celebration with light refreshments will take place at Nie Family Funeral Home, 3767 W. Liberty Rd., Ann Arbor, Michigan on Thursday, October 27, 2022 from 3-7pm. A private family burial will take place at Arborcrest Memorial Park.