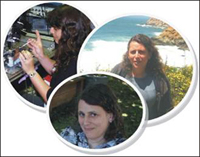 Barbara Chapman, PhD, an inspiring educator at the University of California, Davis and a leader in developmental neuroscience, died on February 11, 2013, after a long battle with cancer.

Dr. Chapman received her PhD from UCSF in 1991 and conducted postdoctoral training at the Max Planck Institute for Psychiatry in Munich and CalTech. As a graduate student with Dr. Michael Stryker, she studied the development of orientation selectivity in visual cortex, the effects of visual deprivation on cortical development, and the organization of thalamic connections that establish orientation selectivity. Dr. Chapman continued to study the development of orientation preference as a postdoc with Dr. Tobias Bonhoeffer. As a postdoc with Dr. Scott Fraser, she extended her studies of neuronal development to the vestibular organ of the zebra fish.

She returned to San Francisco and married Lee Stone, her grad-schoolmate, at the Conservatory of Flowers in 1994. They had two daughters: Eliana in 2000 and Natalia in 2004.

In 1995, Dr. Chapman joined the faculty in the Department of Neurobiology, Physiology, and Behavior and the Center for Neuroscience at UC Davis where she rose to the rank of full professor in 2007. In addition to her research, she was deeply committed to graduate education and served both as the Master Advisor (2003-2006) and the Chair of the Neuroscience Graduate Program (2009-2012). She also co-directed the Cold Spring Harbor Laboratory summer course on "Structure, Function, and Development of the Visual System" (2005-2011). She was the thesis advisor for Daniel Slutsky, Andrew Huberman, Colenso Spear, Samuel Failor, and Zachary Davis, and mentored postdoctoral fellows Imke Gödecke, Farran Briggs, Chao Sun, and Sarah Karlen. Barbara was beloved for her kindness towards all students, her lack of pretense in the pursuit of excellence, and her ability to instill her joy for science and discovery in others.

At UC Davis, Dr. Chapman's research program made several seminal discoveries that revealed the roles of neural activity in the shaping of connections in the developing brain. Her research on the mammalian visual system provided key insights into the mechanisms that establish the precise neural mapping between the eyes and the lateral geniculate nucleus of the thalamus, and revealed the role of retinal activity in the development of ocular dominance columns and binocular receptive fields within primary visual cortex.

Dr. Barbara  Chapman is survived by her husband Lee Stone, her daughters Eliana and Natalia of San Francisco CA, her mother Anne Chapman of Berkeley CA, her siblings David Chapman of Incline Village NV, Alex Chastain-Chapman of New York, NY, and Sydney Chastain-Chapman of Hoboken, NJ. She was preceded in death by her father, Tony Chapman.