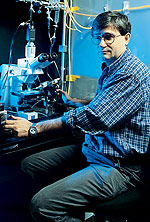 After a brief and sudden illness, Dr. Angel Alonso passed away in the early morning of July 6, 2005 at the Montreal General Hospital in Montreal, Quebec. He will be deeply missed by his wife Karina, his daughters Eva and Naida, his mother Pilar, his sisters, Isa, Carmina and Pili, his brother José Alberto, his father-in-law William, as well as by numerous colleagues and friends around the world.

Dr. Alonso was a world-renowned neuroscientist. He studied the role of neuronal oscillations in brain functions, importantly memory. He was a Chercheur National of the Fonds de la Recherche en Santé du Québec and Vice-President of the Montreal Chapter of the Society for Neuroscience.

Angel Alonso touched the lives of many people – the many students and fellows that trained in his laboratory, his colleagues, as well as his friends. He lectured around the world and published his research in more than 60 scientific articles in prestigious journals such as Nature.