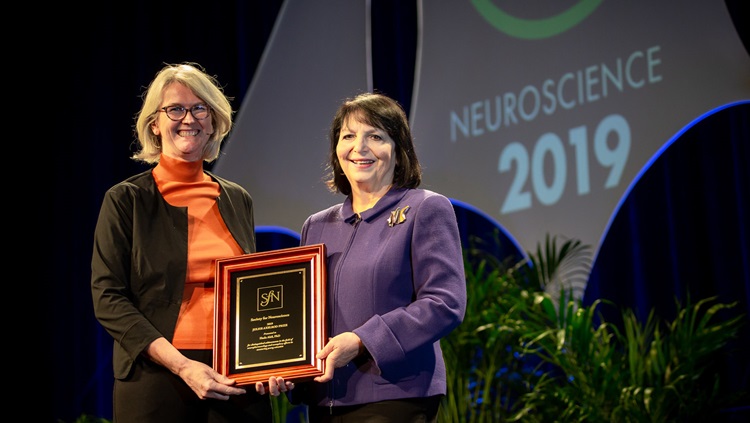 Huda Akil, PhD (right), of the University of Michigan, is honored with the Julius Axelrod Prize.

The Julius Axelrod Prize, endowed by the Eli Lilly and Company Foundation, honors a scientist with distinguished achievements in the broad field of neuropharmacology (or a related area) and exemplary efforts in mentoring young scientists.

Recipients receive a $30,000 prize and complimentary registration, transportation (economy air or ground), and two nights hotel accommodations for the SfN annual meeting. The SfN president presents the prize at a lecture at the meeting. In addition, the recipient is invited to give the keynote address for a symposium that is held at the NIMH in the Spring of the following year. This annual event is held in honor of Dr. Julius Axelrod to commemorate his monumental contributions to the fields of pharmacology and neuroscience.

Nominations of women scientists are encouraged.

Demonstrated accomplishments in the field of neuropharmacology or a related area and have shown dedication to mentoring young scientists.