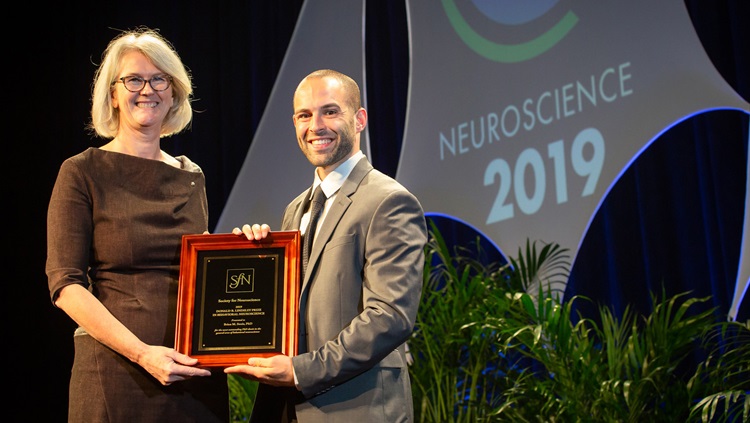 Brian M. Sweis, PhD (right), of the University of Minnesota, accepts the Donald B. Lindsley Prize in Behavioral Neuroscience.

The Donald B. Lindsley Prize in Behavioral Neuroscience, endowed by The Grass Foundation, recognizes a young neuroscientist's outstanding PhD thesis in the general area of behavioral neuroscience.

Recipients receive a $5,000 prize and complimentary registration, transportation (economy air or ground), and two nights hotel accommodations for the SfN annual meeting. The SfN president presents the prize at a lecture at the meeting.

All nomination materials must be in English, including full theses if invited for the second round review. For nominees with theses in a language other than English, the selection committee will accept an extended abstract and peer-reviewed publication, both written in English.

Nominees must have a thesis submitted and approved between January 1 and December 31 of the preceding calendar year.